Here you are – Vicenza Boston
Next
Prev

In the occasion of the finissage of IMPERSONAL SOLO SHOW, our current exhibition in Boston, we’ll perform HERE YOU ARE in a shared form between Vicenza and Boston.

In HERE YOU ARE the scene is a photo set completely obscured. The performer moves in the total darkness executing a movement score that the spectators cannot see, but only guess or imagine.
Several times and suddenly a light signal forces the performer to stop his/her action, compelling him/her to appear as quickly as possible in front of the camera, in order to be portrayed.

The live performance will be executed at Teatro Bixio in Vicenza, while the portraits will be broadcast and projected in real time at Laconia Gallery in Boston.

The two different presences of the performer, the physical one and the photografic one, are then made absolute and at the same time fragile and unstable in their missing each other. 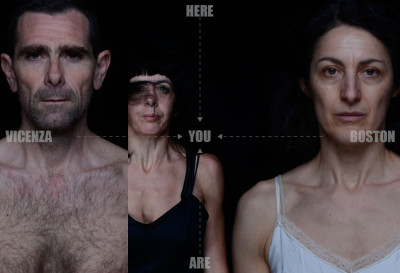