Incipit – located in the complex of the factory of Cotorossi in Debba (Vicenza) – is the atelier of four artists: Bruno Lucca, Andrea Garzotto, Valentina Rosset and Daniele Monarca. The latter, for a day, has decided to dispose of the artist’s clothes and wearing those of a Collector, organizing an exhibition in the place where he normally works. It is a collective which brings together people that in different ways and times have crossed the life of this impromptu collector. All were asked to show for a day not a finished work, but rather to expose something that has to do with the creative process. Every person involved in this show has brought to light something of their own creativity that normally remains in shadow, and perhaps remains unexplored.

Jennifer Rose participates with the members of the collective to act as a screen to a small video projection. 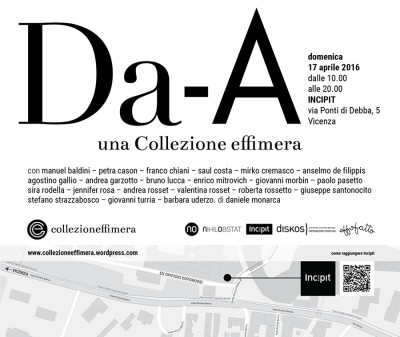